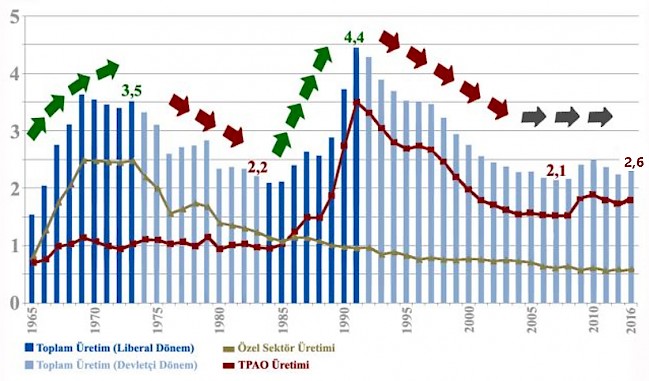 1887: The oil charter of Iskenderun and around was granted to the Grand Vizier Kamil Pasha following a decree, which was later transferred to Ahmet Necati Bey.

1890:  Gas signs were encountered in the first drilling in Çengen, İskenderun.

1898: An oil well of 108 m deep was drilled in Gaziköy with the help of workers from Romania, yet oil was not found. In the same period, several wells were drilled in Şarköy and Mürefte by the Ottoman Bank and French companies and oil was found in 82 m deep in Şarköy well and 74 m deep in Mürefte well, which had no economic value.

1899:European Petroleum Company sent a geologist from London to make analyses and oil was found in a well drilled in Hora Dere following the analyses. At first 2 tons of oil was drilled per day, and a total of 47 tons of production was made until the end of 1901. Yet efficiency decreased following 2 years of production and the well was left.

1914:  European Petroleum Company was given the permission to explore and produce oil in and around Mosul yet operations could not be started due to the First World War. In the same year, Standart Oil performed geological etude in Mürefte – Hoşköy.

1926: The right to explore and operate all mines of oil and oil compounds within the boundaries of the Republic of Turkey was granted to the Government in accordance with the Petroleum Law accepted on 24th March 1926 No. 792.

1930: Boğaziçi Refinery, which is the first refinery of Turkey, was established by Türkiye Naft Sanayi A.Ş. (Turkey Napht Industry Inc.). The refinery, which was established in Istanbul – Beykoz and processed crude oil imported from Romania, has a processing capacity of 40 tons a day. Refinery was shut down due to tax-related issues in 1934.

1933: Exploration activities were launched in accordance with the Law passed on 27th May 1933 No. 2189 concerning the Establishment of Gold and Oil Exploration and Operation Management.

1935: Mineral Research and Exploration Institute (MREI) was founded in accordance with the Law enforced as of 22nd June 1935 No. 2804, Gold and Oil Exploration and Operation Managements were abolished and all of their roles were transferred to MREI.

1941: Petroleum Office was established on 14th February 1941 as a public corporate body bound to the Ministry of Trade so as to buy, sell and stock all types of oil and oil products required for the public and national defense needs according to the National Protection Law and to establish and operate refineries.

1942:  Raman Tecrübe Refinery was established in Raman site Maymune Strait. The capacity of the refinery was 10 tons per day which was built using the materials of Boğaziçi Refinery.

1945:  A refinery was established in Batman with a daily processing capacity of 200 tons.

1954: 1The Law No. 792 was abolished with the Petroleum Law No. 6326 enforced on 16th March 1954. The Law was formulated by the lawyer and geologist Max Ball who also formulated Israeli Petroleum Law in 1952. As the Law was passed, it was envisaged that the oil exploration and operation role assumed by MREI would be transferred to the corporate body to be founded except for the geological reconnaissance survey. The duty to enforce the Law was assigned to the Petroleum Management Authority. Later on, Turkish Petroleum Corporation Law no 6327 was enforced. This Law granted the Cabinet the power to establish Turkish Petroleum Corporation (TPC) which is an incorporate body bound to special legal provisions.

Oil activities were accessible to domestic and foreign private capital in accordance with the Petroleum Law. Private entities were allowed to engage in oil survey, exploration, operation and processing activities in accordance with the Law and Cabinet, Energy Market Regulatory Authority (EMRA) and Petroleum Management Authority were authorized to enforce savings disposal on behalf of the state for oil resources and these two issues were dealt with separately. The most significant feature of this Law is that operation activities and administrative decision making process were divorced. Thus, the implementation of the operation activities enforced with the share allocated from the general budget was accessible to the public and private sector entrepreneurs, which finally had a commercial feature.

1957:  Some provisions of the Petroleum Law were amended with the Law No. 6987 which was enforced on 6th June 1957. In the same year, Anadolu Refinery Inc. (ATAŞ) was established with the partnership of Mobil – BP - California Texas – Shell.

1973:  Substantial changes took place in the statistic structure in accordance with the Law enforced on 8th April 1973 no: 1702 which is known as the Petroleum Reform Law:

1983: Statutory Decree issued on 20th May 1983 No. 60 concerning State Economic Enterprises and Public Economic Enterprises has transformed Turkish Petroleum Corporation into a partnership bound to the Turkish Petroleum Authority. It was decided that TÜPRAŞ and POAŞ would be established and TPAO shares in PETKİM and İGSAŞ would be transferred to the Authority of Chemistry Industry in Turkey in accordance with the same Statutory Decree. Some provisions of the Petroleum Law were amended with the Law enforced on 30th March 1983 No. 2808.

1994: License receiving conditions specified in the Petroleum Law were amended under the Privatization Law enforced on 27th November 1994 No. 4046. Refinery and pipeline management activities which were formerly utilized following an entitlement were then accessible to everyone who received the permission from the Cabinet.

1998: Automatic Pricing Mechanism was established based on Italian market prices for fuel oil in the form of determination of price ceiling in accordance with the Cabinet Decision.

2000: Law on Transit Pass of Oil via Pipelines No. 4586 was drawn up so as to grant Baku-Tbilisi-Ceyhan (BTC) Crude Oil Pipe Line a legal status. Transit pass of oil was taken outside the scope of the Petroleum Law in accordance with the Law adopted on 23rd June 2000.

2001: Natural Gas Market Law No. 4646 was prepared for liberation and alignment with EU Directive. Market operations concerning natural gas were separated from oil operations in accordance with the Law passed on 2nd May 2001 and taken outside the scope of Petroleum Law; Statutory Decree No. 397 regulating natural gas import and distribution was abolished.

Natural gas market was taken in the scope of roles and power of the Energy Market Regulatory Authority (EMRA) established in accordance with the Electricity Market Law No. 4628 and the title of the institution was changed into EMRA.

2003: The provision of the Petroleum Law was amended with the Law on Working Permits of the Foreigners approved on 27th February 2003 No. 4817 and the opportunity to employ foreign administrative and professional staff and expert staff was provided to the oil right owners via the permission by the Ministry of Labor and Social Security upon the opinions of EMRA and the Ministry of Interior Affairs were taken.

Operations which require license for execution such as oil transmission, refinery and storage at large amounts were taken outside the scope of Petroleum Market Law which was enforced on 20th December 2003 No. 5015. Free use of distribution, shipment and relevant operations were taken in the scope of a legal regulation for the first time.

2007: New Turkish Petroleum Law No. 5574 was approved by the General Assembly of the Turkish Grand National Assembly (TGNA) on 17th January 2007 whose drafting was completed in Industry, Trade, Energy, Natural Resources, Information and Technology Commissions of the TGNA. The Law, whose four provisions, one being interim, was sent by the 10th President A.Necdet Sezer to the TGNA was re-accepted after excluding one provision in the Commission and sent to the General Assembly. Law has been in the agenda of the TGNA since February 2007.

2013: The new Turkish Petroleum Law No. 6491, which has been in operation since 2007, was put into effect on 30.05.2013 by publication in the official gazette. In the context of the new law, the exploration and operation license periods have been extended, the "State Right" has been removed from the search license areas and the possibility of expropriation has been created. Moreover, it has been decided to leave the "guarantee" issue to the minister's discretion in the case of oil discovery or non-traditional methods.